Happy Friday Terps! If you’re anything like me you’re beginning to wonder when the Fall weather is going to stick around and sadly I bring you bad news. Today the high is going to be around 78 F with humidity at 63%, in the sun it will feel like 80 F. Good news about this is that it’s going to be mostly cloudy throughout the day with cloud cover averaging 60% and winds coming from the east ranging from 0-5 mph. There is a chance of drizzling that will occur after 2 p.m. but no significant rainfall is expected during the day.

Temperatures are expected to be in the lower 60s this evening with winds becoming stronger at 5 mph coming from the east. Cloud cover is expected to be around 70% throughout the night and the chance of drizzles increases but the overall chance is around 15% so if you plan on going out tonight it might be beneficial to bring a raincoat incase of a scattered drizzle. 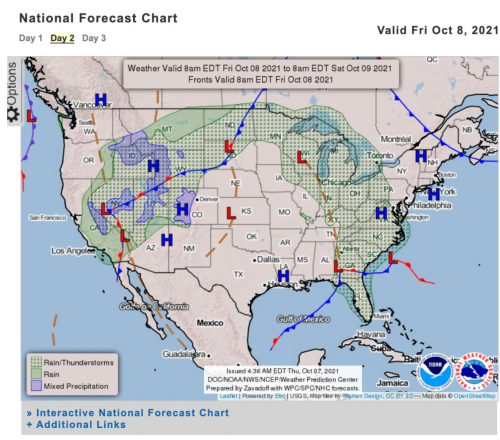 A screenshot of the national frontal map for Friday, shows a high pressure system west of campus surrounded by rain/thunderstorms. (Image via WPC)

Tomorrow is going to be slightly cooler than today with high temperatures expected to be 73 F with overcast skies throughout the day. Winds will be coming out of the northeast with speeds ranging anywhere from 5-10 mph. The chance of scattered showers increases to be around 40% throughout the day, so throw an umbrella or raincoat into your bag in case you get caught in one of these showers.

As a low pressure system develops offshore, the chance of rain is increasing to be around 60% with thunderstorm possibilities of 17%. Winds are going to remain constant from the northeast at around 6 mph during the night and clouds will cover 99% of the sky to no stargazing/ moon gazing is going to happen tomorrow tonight.

Some rain is expected on Sunday but any precipitation is going to be moved out by Sunday night. As we move into next week, the weather is expected to be dry as an upper-level ridging builds from the west.