If you’re hitting the roads this morning, beware of dense morning fog. Otherwise, temperatures will be much above average as highs top out in the low 60s. Skies should become partly cloudy this afternoon as a south wind at 5 to 10 mph develops. 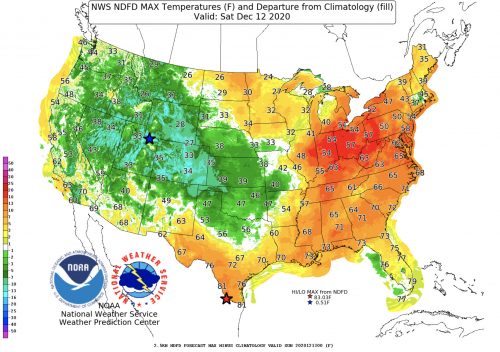 High temperatures today will be about 15 degrees above average across much of the Mid-Atlantic (image via wpc.ncep.noaa.gov).

Temperatures won’t cool off much overnight with lows only dipping to about 50 degrees, or nearly 20 degrees above average for mid-December. Skies will be partly cloudy and there will be a southwest wind around 10 mph.

Sunday will pretty much be a repeat of today as temperatures once again top out in the low 60s under partly to mostly sunny skies. Winds will shift from the southwest to northwest at 5 to 10 mph. 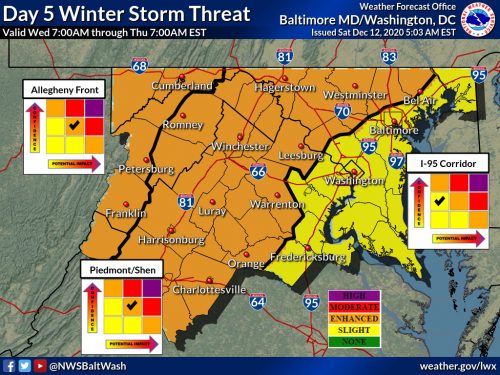 The Baltimore/Washington, D.C., National Weather Service Office has raised the winter storm threat to a ‘Slight’ risk for Wednesday in College Park (image via weather.gov).

Warm-weather lovers should enjoy this weekend because Old Man Winter is looking to make a strong comeback for the last full week of the semester. Monday will be a raw, dreary day with highs stuck in the low 40s as the rain falls. By Wednesday, highs will hover in the 30s as a potent coastal low could bring College Park its first accumulating snowfall of the season.