Patches of fog will be present early in the morning, providing a nice preamble to the spookiest week of the year. Temperatures will start off in the upper fifties in the morning, rising to the low seventies by the late afternoon. There will be partial cloud cover throughout the day, with little to no wind.

Temperatures will dip back down to the low sixties, and the clouds will start to roll out, with total cloud cover dropping to five percent by 11 p.m.

More of the same, with highs in the low seventies and lows in the upper fifties. There is a twenty percent chance for some precipitation in the late afternoon, so be on the lookout for that. 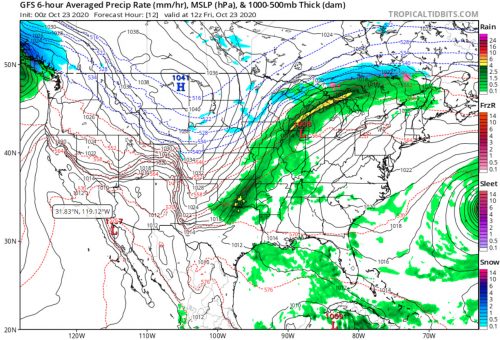 A big system in the middle of the country could bring precipitation on Saturday. Image courtesy of Tropical Tidbits.

Nothing really going on for the next week or so; we’re looking at a clear and cold Halloween, with highs expected in the upper fifties and lows in the mid forties.