Today was an average day here in College Park, with no significant changes in weather compared to earlier in the week. A high of around 43 and winds at a comfortable 8 miles per hour, anything more than a light jacket wasn’t even needed. Of course, having clear skies rather than the overcast conditions we saw would have made for a better day but it sure is better than the rain we saw over the weekend.

Looking ahead to this evening, we can expect cloudiness to persist well into the night. Temperatures will likely drop all the way down to 35 by tomorrow morning, so if you’re going to be out and about be sure to bring a jacket or even a winter jacket. Winds should remain light, perhaps being even lower than the day at around 6 miles per hour.

Looking ahead at tomorrow, we can expect somewhat better conditions compared to today, although this will definitely change by tomorrow night. Expect a high of about 46 degrees, with winds ranging from 8 to 10 mph. The skies should be mostly sunny as a high pressure system makes it way in from the west, clearing out the clouds we had today.

Things will likely change into the night however, as we are expecting to receive some snow late Thursday perhaps more into early Friday morning. Earlier this week, most models showed practically nothing in the way of appreciable snow totals. But it seems at least on the latest runs that snow totals are actually increasing. All of the models show at least 2 inches for College Park, while the GEM and NAM 3km show up to 5 inches for Northern Maryland. The NAM took this even further, showing up to 5 inches well into DC. This may be something to keep an eye on if you’re hoping for some delays in school or the government on Friday. 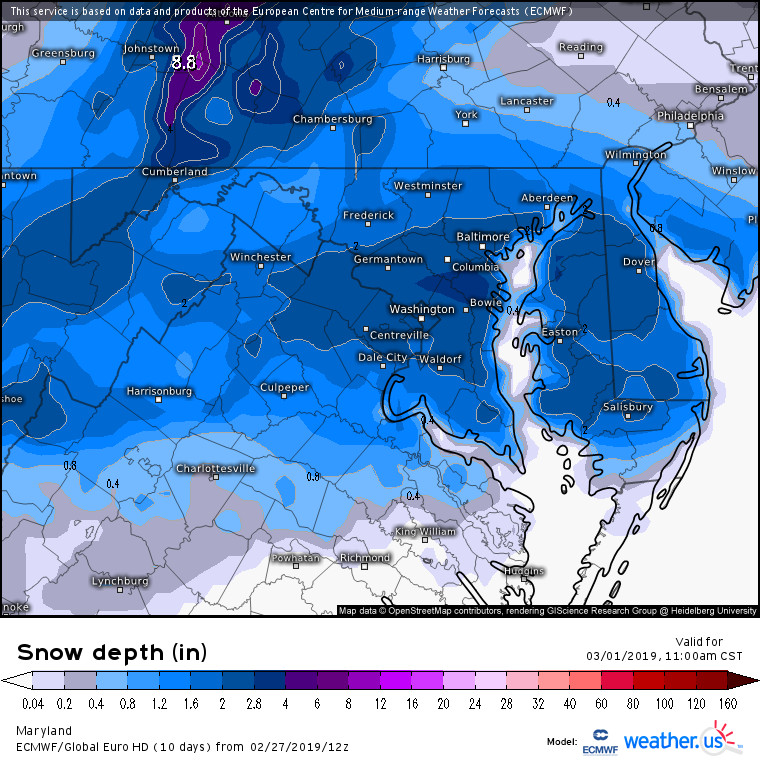 Latest run of the ECMWF which shows about 2.5 in of snow for College Park. Source: weather.us

As for the week ahead, expect winter to continue on despite what some people (or groundhogs) may have expected. The ECMWF has stayed consistent on indicating that colder air is on the way, and temperatures could drop sharply for the Midwest once again. This could result in some snow or sleet at the start of the week, with extended runs of the GFS Model Output Statistics indicating about 3 inches of sleet could be expected Sunday night into Monday. Beyond that things are sketchy in terms of what kind of weather we can receive with all the models diverging in terms of where any potential systems will go. Overall though, winter is definitely not over so you’ll want to keep your winter coat ready going into next week.