Home » Weather Discussion » Evening Update: You Can Put Your Hat Back On

Evening Update: You Can Put Your Hat Back On

Today was a cold, windy day in College Park. A high wind warning went into effect around 4 a.m. this morning, and wind gusts have reached thirty mph. It’s the kind of day that makes you hunch over with your hood up to block the wind, but at least it will remain sunny. Luckily, it won’t be as windy tomorrow; however, the temperatures will stay low.

The high wind advisory is still in effect until 6 p.m., but by 8 p.m., wind speeds should drop to around 15 mph. The sky will remain cloudless, making the stars visible. Unfortunately, while the biting wind will slow down to around 10 mph, temperatures will still fall below freezing to about 28 degrees tonight, so be sure to bundle up!

Clouds will start to roll in around dawn tomorrow, making for a cold, grey walk to your morning classes. Temperatures will peak at 46 degrees around 3 p.m., which is when the clouds start to give way, leading to partly cloudy skies in the afternoon. Winds will be northwesterly and light, between 5 and 10 mph. Tomorrow night will also be clear and cold, with similarly light winds. 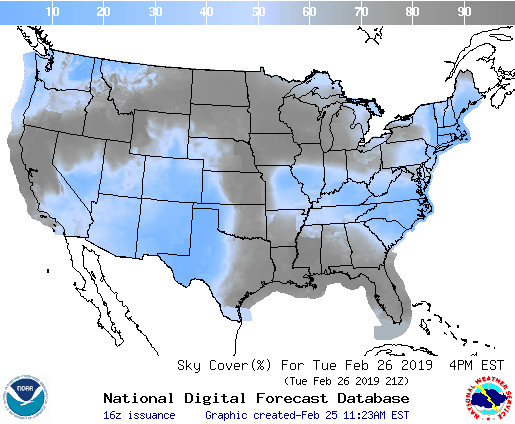 This image from NOAA and the NWS shows the cloud cover at four p.m. on Tuesday. As you can see, we are expected to have some partially cloudy skies tomorrow afternoon.

This week will largely be the same weather: clear and cold, with little cloud cover. There is a small chance (8%) of precipitation this Wednesday night, but it is likely we won’t see any rain until Friday or Saturday. One thing to look forward to is the possibility of snow next Wednesday, March 6th, when we have temperatures dropping into the low twenties during the night. Though there is time for this forecast to change, there may still be more snow days this semester!