Home » Weather Discussion » Evening Update: An End to the Rain

Evening Update: An End to the Rain

Finally, after several days of near continuous rain and barely a coating of snow, College Park bathed in sunshine today. With a high of just 47 degrees and winds ranging from 17 to 22 mph, the day may have been a bit too windy for some, but at least it offered a change from the overcast conditions we previously experienced. Hopefully after reading our forecast yesterday you remembered to ditch your umbrella but keep the jacket for when the wind picked up, which it indeed did. At times the area did see biting gusts up to around 30 miles per hour, although the mostly clear skies helped keep the wind chill minimal.

Looking ahead into the evening we can expect temperatures to drop below freezing, but don’t expect any snow. Temperatures will drop down to around 29 degrees by tomorrow morning, and winds will die down to between 6 and 13 mph with gusts up to around 25. With a high pressure system predicted to move into the region overnight, expect skies to become increasingly clear as we move into Thursday morning. If you decide to venture out, make sure to bring a jacket, as decreasing cloud cover will allow more heat to radiate away from the surface.

With the arrival of the aforementioned high pressure system, Valentine’s Day should have both higher temperatures and clear skies. Expect a high of around 52 degrees, with light winds ranging from about 5 to 8 mph. Daytime temperatures will be warmer than average for Valentine’s Day, which will be a welcome break from the cold and wet temperatures of this week. If you have any special plans, just bringing along a windbreaker should be sufficient enough to keep warm throughout the day and even the evening, as a low around 43 degrees is expected for Friday morning.

While the latest run of the FV3-GFS model shows warmer than average temperatures, a mass of colder air can be seen waiting rather ominously over the central US. Source: Tropical Tidbits

Looking to the week ahead we can expect temperatures to continue increasing temporarily, with Friday possibly having a high in the upper 50s with a slight chance for rain the evening. Unfortunately, this warming trend will likely be cut short by a cold front arriving Friday which is why we may see rain for a short spell as it passes through the region.

Looking ahead into the weekend, this cooler air mass will offer the possibility for snow when a low pressure system overtakes the region Saturday. As it stands right now, uncertainty among models precludes any realistic forecast for snow totals but it will be something to keep an eye on as the week comes to an end as several models have began a trend of heavier snowfall. If you’re interested in the more technical challenges of the forecast, more details follow.

The 12z model run of the GEFS. With this being a medium range forecast, nothing is set in stone yet but this latest run should bring some (some) hope to snow lovers as it would indicate the DMV will not get caught in the warm sector of the low as occurred with this week’s storm. Source : Tropical Tidbits

The underlying technicalities of the uncertainty for the current forecast is primarily the speed and location of the low pressure. The latest run of the FV3-GFS had the system well far south of the region however, given that the 18z run of the model lacks important radiosonde data and the rather unfortunate operational issues currently ongoing with the FV3, the next most accurate model run would be the Tuesday 00z run.

This run agreed with the ECMWF in terms of the storms location and overall development, although two major differences were of course the expected bias of the GFS to overdevelop the storm compared to the ECMWF and the resulting impact on snowfall totals and timeline of the event. Compared to the ECMWF, the GFS had a somewhat stronger low developing aloft and to the west of the surface low, allowing the surface low to strengthen more. On the other hand the ECMWF has the surface low developing almost beneath the upper level trough and preventing any deepening. And finally, the GFS places Maryland on the northwest side of the storm as cyclogenesis occurs, keeping the storm right along the edge of heaviest precipitation.

Interestingly though, the timing on both storms started almost perfectly but the FV3 kept the storm in the region until early Sunday morning when it exits compared to around 1600 Saturday with the ECMWF.  Even with these two models changing their tune toward a snowy scenario the latest 18z 32km NAM failed to materialize any system at all, likely due to the lack of development of a shortwave trough. Meanwhile the CMC did depict a shortwave in its latest 12z run, but the upper level low again developed atop the surface low and minimized its development. In either case snow totals of that amount and that rapidly would be significant ,and we’ll definitely be keeping an eye on model runs here over the next few days to see if the trend continues.

The Tuesday 00z FV3-GFS model run which, while a day old, would provide the most accurately initialized run of the model thus far. Its quite likely snowfall like this is overblown for the region but given the shorter nature of this forecast it does indicate the large spread in uncertainty. Source : Tropical Tidbits 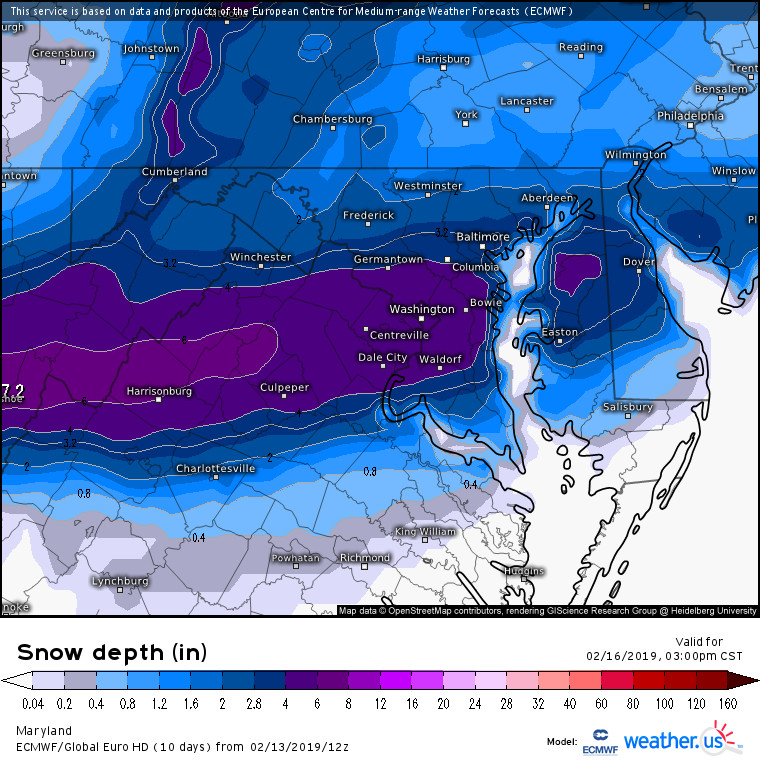 The latest 12z ECMWF model run, displaying a more toned down event for the DMV and with DC receiving some of the highest totals apart from in the Appalachian Mountains. Source : Weather.us