Although the skies may have been clear earlier today, don’t let it fool you for long! The much awaited “polar vortex” has finally made its way into town with spectacular results likely to follow later today and up until Friday. The high was just 34 degrees today, with temperatures expected to plummet as an arctic cold front approaches the region from the west. Although a region of polar high pressure has built aloft, the skies may become overcast at times in College Park.

Anyone who has stepped outside can also tell you that the winds were definitely picking up today as well, ranging from about 23 to 26 miles per hour with gusts up to 50 miles per hour at times, prompting the Wind Advisory currently in effect until 6:00 PM. As if the polar vortex was not a unique enough event for College Park today, a snow squall made its way through Maryland this afternoon. The National Weather Service issued a Snow Squall Warning for much of Western Maryland earlier today. They experienced high winds and intense snowfall that lead to very poor visibility. 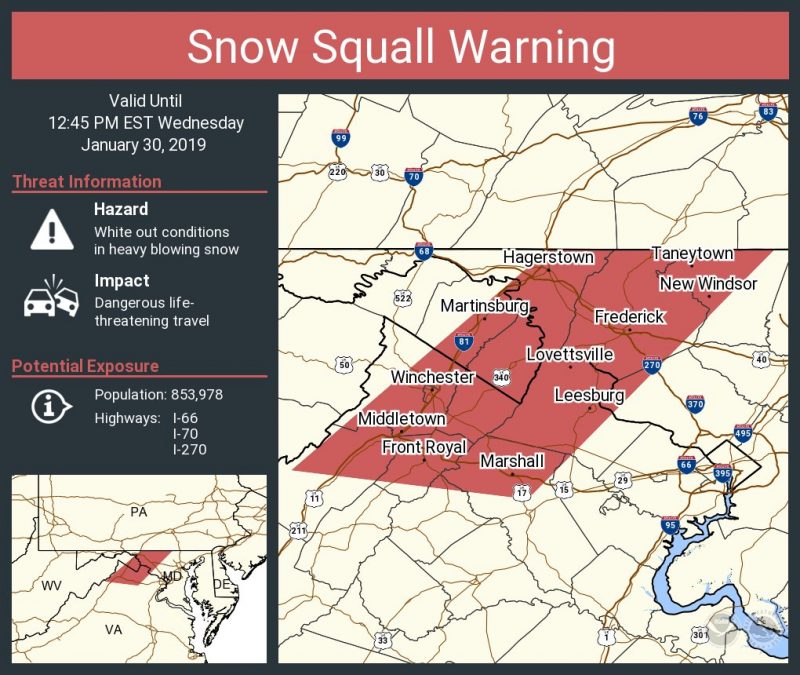 If crazy winter weather is just your thing, then you’ll be pleased to see that the night will continue our parade of anomalous weather. With the entrance of the arctic cold front mentioned earlier, temperatures are going to drop wildly to about 6 degrees by tomorrow morning. Winds will also continue to batter the region, ranging between 17 and 22 mph with gusts up to 39 mph possible. Despite these lower wind speeds and gusts as compared to during the day, these speeds combined with the frigid temperatures will lead to wind chills possibly as low as -9 degrees. For those who don’t know what the wind chill is, it is effectively what the air will feel like with both the temperature and wind speeds accounted for. From temperature alone, tonight we could see our coldest day of winter yet for this year. A Wind Chill Advisory is currently in effect until 10:00 A.M. tomorrow morning, and you’ll definitely want to bring out your heavy winter coat, gloves, and hat, to avoid hypothermia or even frostbite should you remain outside for prolonged periods.

This graphic, courtesy of the National Weather Service, does an excellent job displaying how serious the wind chill can be.

Given that temperatures tomorrow morning will hit a low of 6 degrees, it should be no surprise that the rest of the day will remain frigid. A high of just 23 degrees is expected with wind speeds expected to remain at about 17 to 22 mph. Wind chill values will likely perch close to, if not below, zero. Skies should remain sunny without interruption as the high pressure region mentioned earlier maintains its presence overhead. No precipitation is expected as well, making for a clear, albeit frigid, day.

As you may or may not have heard, there does exist yet another shot at snow for the region on Friday. However, the most important factor in this forecast will be whether the storm directly hits the region or clips it before heading out to sea. Irregardless of either scenario, expected snowfall totals would likely be close to zero, and perhaps an inch at best in some areas. Model runs earlier in the week showed the storm hitting midday and into the evening, but more recent runs now show it should start in the early evening and go overnight, further lessening any potential impacts this system would have for the region. Apart from this possible snow storm, we do have good news in the way of temperatures, as it seems we may see a return to the 50s by Sunday.