Today was another cool gray day across the DMV with scattered showers in the afternoon. Temperatures struggled to reach 50 today, which is 8-10 degrees below normal. The next couple of days will bring even colder temperatures and a chance of some frozen precipitation.

This image from Weather Prediction Center at NOAA shows the forecast for today. It’s showing the showers that came today and a cold front approaching bringing even colder temperatures to the region.

Showers will end as another cold front passes us, but the skies will remain mostly cloudy through midnight. Clouds will begin to break up more after midnight allowing temperatures to drop to the low 30s. Winds will be from the northwest at 8-11 mph.

Tomorrow will bring partly cloudy skies, but temperatures will be colder with highs in the low to mid 40s. The cool northwest wind will continue to blow at 7-10 mph. In the evening clouds will begin to develop, becoming mostly cloudy by midnight. Lows will be in the low 30s with calming winds from the north at 6 mph or less. 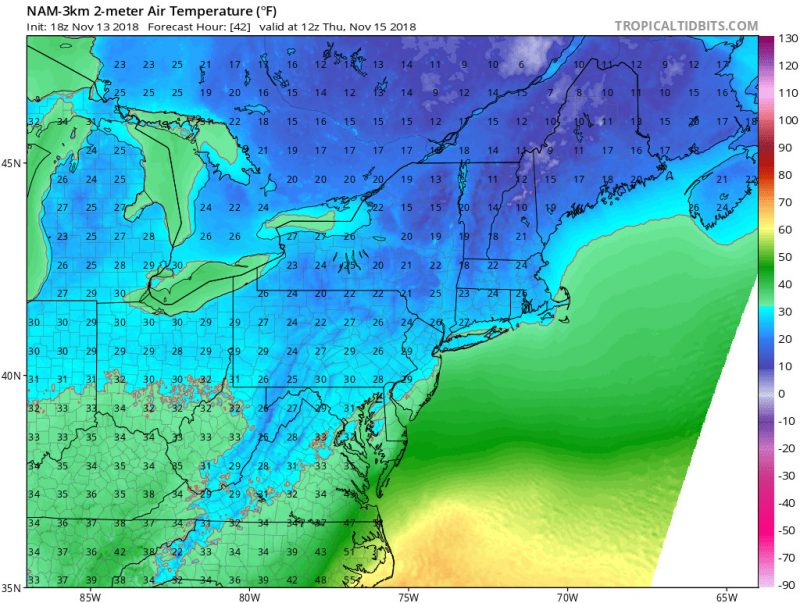 This image from Tropical Tidbits shows the NAM 3km model 2m temperature at around 8 am on Thursday. Temperatures are currently predicted to be around freezing which could lead to some sort of mixed precipitation.

In the early morning, temperatures may be cold enough to have a mix of rain/snow/sleet, especially in areas to the north and east of Washington, DC. No accumulation is likely as the ground is still too warm. Temperatures will rise enough by late morning to make the precipitation change to all rain; high temperatures will be stuck around 40 degrees with northwest winds increasing to 5-10 mph. Rain will continue into the evening, allowing temperatures to only fall into the mid to upper 30s. Showers will eventually end on Friday with temperatures increasing back to around 50.

This image from the Weather Prediction Center at NOAA shows the forecast for Thursday. The Metro DC area is at the border of rain/snow and rain, meaning there is a chance of mixed precipitation, especially north and east of Washington, DC.