College Park enjoyed a sunny, but windy start to the day, which turned to a partly cloudy afternoon. Nevertheless, the sun managed to shine through to brighten this chilly Thursday afternoon.  Westerly winds blew at 13 mph as today’s temperature reached 44, but those chilling gusts at 22 mph would make one think otherwise.

People watching the sky this afternoon might have spotted a colorful ring around the sun as it hid behind a thin veil of clouds. This rainbow ring, called an aureole, is very common on partly cloudy days like today. More rarely, additional rings may appear around the aureole to form a corona. This optical phenomenon is caused by diffraction. Sunlight skims the edges of millions of small cloud droplets, ice crystals, or other particles. This causes the light to bend at different angles so that the different colors of light appear. To view a corona, obscure the sun with an object and observe the light around it. Do not look directly at the sun, even if it is behind a layer of clouds. 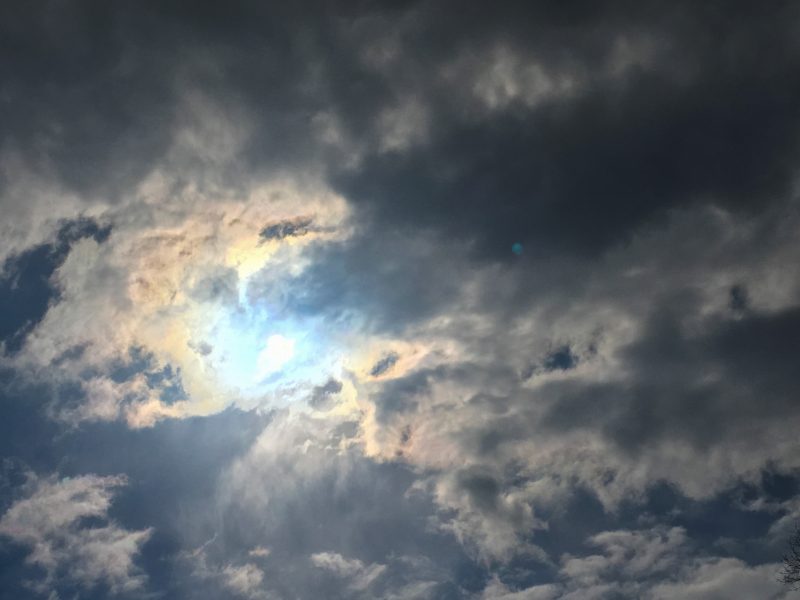 There is a 20% chance of precipitation tonight, with some isolated snow showers before 10 pm. Today’s west winds will lighten just slightly to 8 to 10 mph, and temperatures in the wee small hours of the morning will dip below freezing.

We have a mostly sunny Friday ahead of us with no rain in sight. With temperatures in the mid 40s and persistent west winds at 10 to 16 mph, get ready for some more windchill. Those 25 mph gusts will make you say “brrr!”