A dense fog drifted mid-morning to afternoon over the region, accompanied by a fog advisory, as a result of slightly warmer temperatures following the cold front we just had. These fog conditions will likely develop into convective clouds and showers later this afternoon into evening, so don’t be pulling out Wednesday’s sandals just yet, although our highs will be hovering around the 50s-60s between today and tomorrow. Rain will continue into tomorrow, but the total accumulation is expected to be minimal. 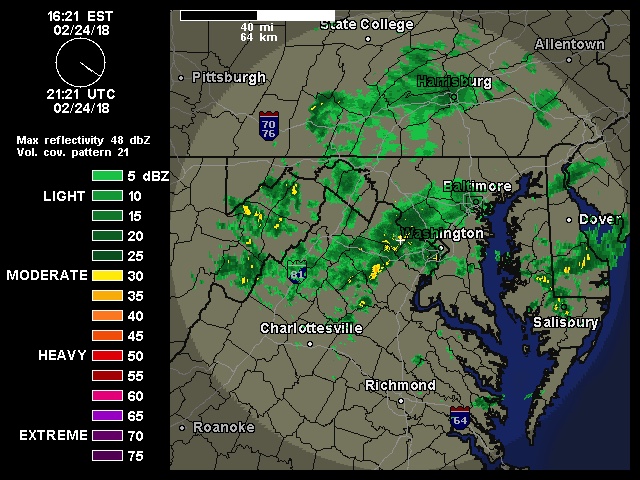 Patches of fog will be sustained by a low of upper 40s but we will shed some of that humidity we experienced earlier today. Northeast winds around 6 mph are expected, but don’t worry tonight will still be warmer than last night. Drizzle could top off our rainfall amounts between a tenth and a quarter of an inch.

Light showers will continue to set the tone tomorrow morning. By mid-afternoon, we see a possibility of thunderstorm development as high temperatures build up into the 60s and for some localities 70s. Southeast winds will transition to a southwest flow around 6-10 mph by afternoon, ensuring the possibility of thunderstorms and an opportunity to shake the previous cold front. Extreme winds could gust as high as 20 mph during this storm development. We will only exceed an inch for total rainfall this weekend, dependent on where thunderstorms occur tomorrow afternoon.

Rainfall expected to total to less than an inch this weekend yet showers remain (via WPC/NOAA).